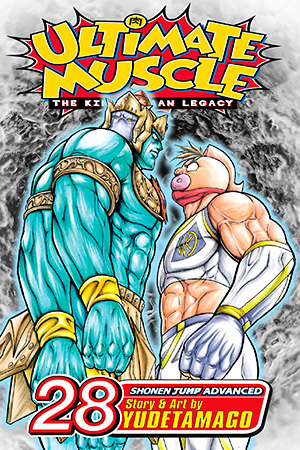 Has it come to this? Really? Does the fate of the earth--nay, the galaxy--rest on the shoulders of the phenomenally unreliable Kid Muscle? Alas, it would appear so. In their tag team match against the two evilest wrestlers in creation, Kid Muscle and Kevin Mask have finally learned to stop punching each other long enough to punch the bad guys. But their newfound friendship seems powerless against legendary baddie Shivano, who unveils moves beyond anything the Muscle League has ever imagined.

With only Kid Muscle standing between us and annihilation, it's tempting to give up and let the forces of evil do what they may. But believe it or not, all is not lost! Faced with the most fearsome fighter of his dad's generation, Kid Muscle just might find the strength he needs from his old man… King Muscle!!