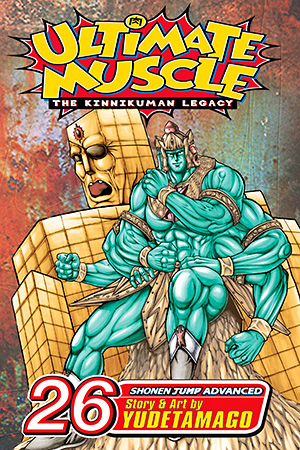 The secret is out: the mysterious hooded member of the tag team Demolition is none other than Shivano, old-school scourge of the wrestling world. What makes Shivano so dangerous, you ask? Well, besides being evil, a genius and totally friggin' evil, he's got three pairs of arms, which logically gives him three times the grappling power of a normal superhuman wrestler...Right?

So dire is the threat that, having cooled his heels for several volumes, Kid Muscle leaps into the fray, thus barely justifying his continued status as the main character. But can the Kid hold his own against one of the most fearsome heavies in Muscle League history, or will he grab Meat's half-assembled body and run for the hills? Fortunately, the Muscle League still has some real heroes, like the inimitable Kevin Mask, the incorruptible Warsman and Kid Muscle's own incorrigible dad!