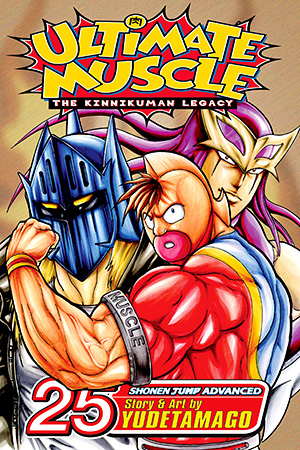 So far the battle between the Army of Idols and the Demon Seeds has been boss and sweet as only a wrestling tournament between a bunch of superpowered bad guys and a bunch of even badder superpowered bad guys can be. Is there any way this earthshaking confrontation could get any better? Sorry, did somebody say tag team? Because that is exactly what supreme bad boys Kevin Mask and Mars are bringing. Facing off against the tag team Demolition, Kevin and Mars join forces, brainstorm a catchy team name and get ready to dominate.

But the Demolition duo is more dangerous than it first appears. Who's the mysterious guy at ringside refusing to tap in and wearing, it must be pointed out, a highly suspicious hooded cloak? What kind of nasty mojo could radiate across Japan and drag evil wrestling coach Sunshine out of a booze-fueled stupor? And can you believe we haven't seen Sunshine since volume 4? What is up with that?