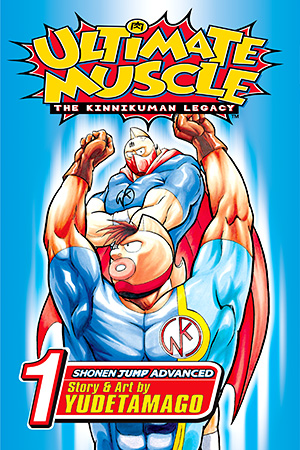 Kid Muscle isn't anybody's idea of a hero. Lazy and cowardly, he's more interested in snacking than fighting. But he's also the son of legendary intergalactic wrestler King Muscle - and when evil threatens the galaxy, the Kid's true muscles bulge through! An gang of evil wrestlers called the DMP is trashing the Earth, squashing innocent citizens and laughing at all efforts to stop their reign of terror. Obviously, Kid Muscle has only one choice: organize a wrestling gang of his own to destroy the DMP and set things right. But before they can take on the DMP, Kid Muscle and his new partners must prove their mettle by defeating the most renowned fighters in the known universe. For Kid Muscle, that means taking down the one wrestler he never wanted to face in the ring: dear old Dad!