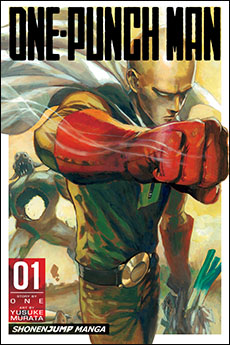 When One-Punch Man burst on the manga scene, it came out swinging—knocking out audiences left and right with incredibly detailed art, memorable characters and a lot of laughs. And now that the anime has been announced, this series is set to become a major force!

The story of how One-Punch Man got started is a bit unusual for a Shonen Jump manga. The series writer, who goes by the mysterious moniker of ONE, has a wildly successful One-Punch Man webcomic on his own site. It got so popular, Yusuke Murata, the artist of Eyeshield 21, contacted ONE to work together and essentially redraw the same story but with more sophisticated art. And by “more sophisticated,” I mean some of the best art in the entire comic or manga world. And that’s not hyperbole. 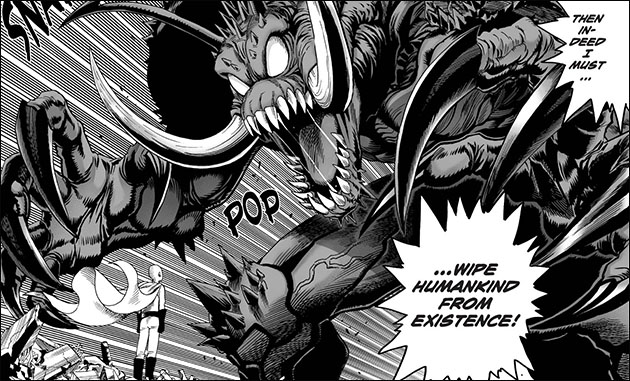 Released as a serialized title in the English-language Weekly Shonen Jump, the manga was immediately popular with readers. From there, it was released exclusively as a digital manga until now! It finally got a print release this month with two volumes coming out at the same time. I have a feeling the world is going to start appreciating bald heroes a whole lot more very soon.

The reason this manga is so popular is because it’s funny. Like laugh-out-loud, show-your-friends, think-about-it-an-hour-later-and-chuckle-again, funny. Saitama is a hero with a serious problem: he’s too strong. Upon meeting terrible villains, giant monsters, knife-wielding maniacs, etc. he beats them too easily. Often in one punch! Which kind of takes the fun out of fighting crime. He also gets no respect in the world of heroes, run by the all-powerful Hero Association. In fact, he’s not even a recognized hero, much to his chagrin. 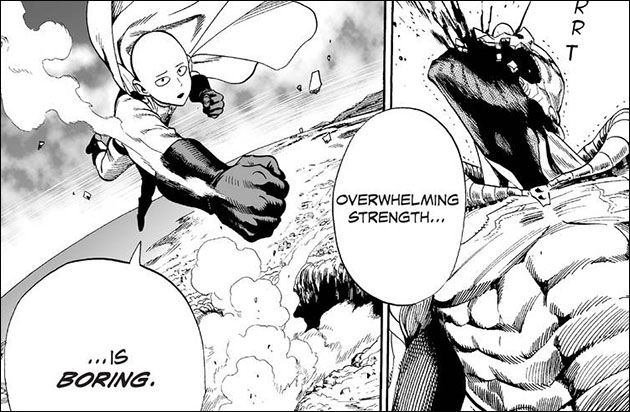 Beyond Saitama’s “too powerful problem,” there are many other humorous aspects of the manga, one of which is the superhero world they live in. The manga is a satire of superhero comics and is filled with hilarious heroes and villains—like the evil Crablante, a vicious crab man who is mad because someone drew nipples on him when he was asleep. And little later in the series, my personal favorites the Tank-top Heroes appear. An entire army of different heroes that all wear tank tops, which give them an advantage from the “freedom of movement” tank tops offer. There’s Tank-top Tiger, Tank-top Vegetarian, Tank-top Master and more. And even the series title, One-Punch Man, is a play on the famous Anpanman, a children’s superhero in Japan whose head is made out of bread. 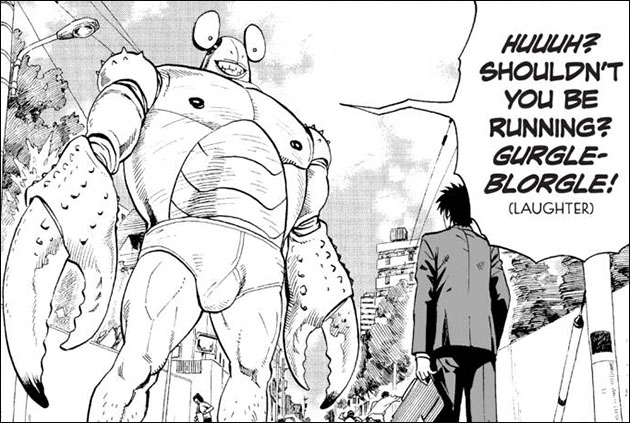 And one of the funniest characters in the manga is Saitama himself. Everything is funny about him. His face is drawn in a very simplistic, almost childlike way, which completely stands out in a manga with detailed art. His big bald head with cartoony features is a great visual gag that never gets old. He’s also rather clueless. Everyone around him seems to understand the rules of the superhero world they live in, but he does not, which sets up many comedic scenarios that pay off. And he’s really quirky. His penchant for bargain sales, his lackadaisical attitude about incredible events transpiring all around him and even his absurd story about how he got his powers all add up to a very funny character. 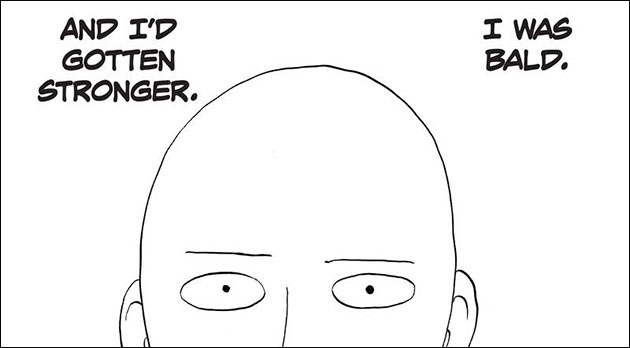 But what’s a superhero without a sidekick? And early in the story he gets one in the form of a powerful cyborg named Genos (pronounced like Jen-Ohs). Quirky characters work best when they’ve got an everyman or straight man with them. In fact, much of comedy is dependent on the straight man. What’s Trains, Planes and Automobiles without John Candy torturing Steve Martin? Genos is not just a great straight man, he’s also a great character. And since he’s not just there to react to Saitama’s cluelessness, he’s also interesting in his own right. He’s got a mysterious backstory and incredible powers, and he looks really, really cool. Plus, he’s the first to truly recognize Saitama’s astounding abilities, and although Saitama doesn’t really care about him at first, it’s fun to watch their relationship grow as the series continues. 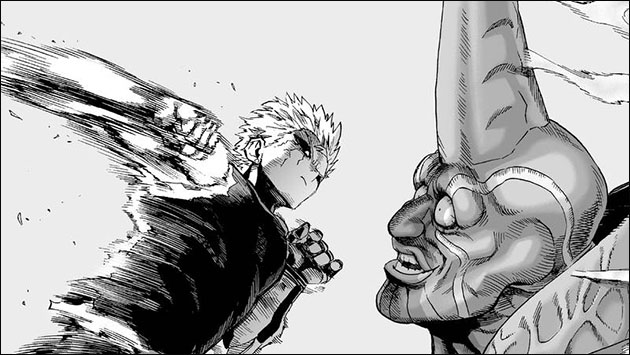 Which brings me to another great element of the manga—character growth. It’s not all gags and wacky battles here. There is a story underneath all the laughs. Both Saitama and Genos grow as characters as do others who join the story along the way. The manga has a surprising amount of heart for what may seem at first glance as a silly superhero satire. And I think this is what will give it the potential to go far in terms of reaching a larger audience. Jokes and fighting are fun, but without a real story or depth of characters, it’s easy to lose fans’ attentions along the way.

And the art! I’ve mentioned the art above, but it’s so freaking amazing. The amount of detail in the panels ranges from impressive to jaw dropping. In the first two volumes it’s really good, but where it’s at currently serializing is Weekly Shonen Jump is unearthly. Some of the best superhero battle art I’ve ever seen. The masterful use of speed lines, ghost images to imply movement, impact shots of heads being exploded from a punch, just to name a few things that stand out. Not to mention the design of the heroes, villains and monsters, which if you've seen the art by ONE Sensei, you’ll know how much Murata Sensei fleshed it out.

Well, I hope I haven’t oversold it too much, but I am deeply impressed with this manga on many levels. When the anime comes out and gets even more fans, I would bet that many more people will suddenly come to realize bald dudes with capes are actually really cool.

Volume 1 and 2 are available in print on viz.com right now!