A ninja exorcist manga with a twist!

Exorcist Matsuri has known upbeat Suzu since they were kids and things are...complicated between them. Now that they’re teenagers and Matsuri has advanced along the track to being a top exorcist, he tries to distance himself from Suzu and her strange ability to interact with ayakashi, the very spirit tricksters and malevolent monsters that Matsuri is sworn to fight. But one day, an encounter with a powerful ayakashi transforms Matsuri into a girl! Now things are really complicated!

Kentaro Yabuki made his manga debut with Yamato Gensouki, a short series about a young empress destined to unite the warring states of ancient Japan and the boy sworn to protect her. His next series, Black Cat, commenced serialization in the pages of Weekly Shonen Jump in 2000 and quickly developed a loyal fan following. Black Cat has also become an animated TV series, first hitting Japan's airwaves in the fall of 2005.
Add favorite  Favorited

Teenage exorcist ninja Matsuri has his hands full protecting his town from harmful ayakashi. But all that exorcising has hardened his heart to the playful and helpless ones. Enter Suzu, Matsuri’s childhood friend who has a crush on him, and who calls ayakashi her friends. But one day, when Suzu is attacked by a powerful ayakashi, Matsuri ends up magically transformed into a girl! The jutsu is permanent, so now he has two challenges—defeat the growing number of ayakashi targeting Suzu and learn how to live as a girl! Is he man, or woman, enough for the task? 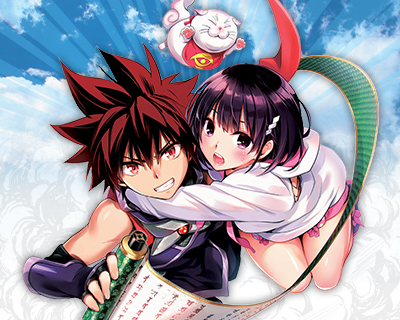 Never miss a new release. Add Ayakashi Triangle to your favorites, and start following it today!